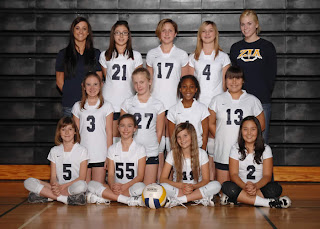 This weekend seemed to be over before it started! We left Friday afternoon for Hannah's Volleyball Tournament in Tucson, a two hour drive away. TRAFFIC. We sat in traffic for an hour and a half at a near stand still, but otherwise the trip was great. My SUPER STAR Hannah and her team took 2nd place in the tournament against some of the top rated teams!! THEY WERE AMAZING! Talk about an exciting, emotional experience! Being new to the competitive league, we weren't aware until arriving for the day that what our girls were playing for was so important to where they are headed and what reputation they will be given. 2nd place in this tournament earned them the 2nd best team title for the entire SW region of the United States! HOLY MAJOR ACCOMPLISHMENT for a young, new 12 team! I don't think the coaches or the parents imagined them making it so far, so fast at just 3 months into the season!

The girls played a total of 21 games over 10 hours!! Hannah earned her spot and played nearly every game. She nailed every serve and had some amazing saves just when we thought the play was over. We were so proud of her! The confidence was shining, the energy was amazing and those girls tried their hardest in every game. Their team work has improved overall and they had FUN! The last two games the fatigue was really starting to show but they wanted that 1st place title so badly. Their hearts and our hearts were broken when they lost the final game. BROKEN. Some of the girls cried, tears welled up in the parents eyes, the coaches spoke with an unsteady and tearful voice. It was apparent we all felt the mixture of fatigue from the emotional ride, elation in the fact they made it this far, pride in seeing them succeed, sadness that they didn't claim that title.......WOW! I still today cant find my words to explain the emotions of it all! My Super Star Hannah is going to earn that Scholarship, I know she will!
Posted by Kelly at 3:38 PM