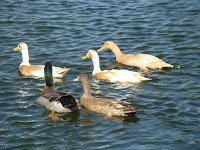 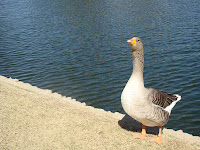 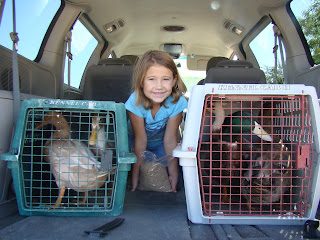 Maddison's first day as the official "Bird Releaser" was great fun! After capturing the Ducks from their little pond at the sanctuary ((which was truly a Wild Goose Chase!!)) we were off to the park to set them free! Even that mean old protective Goose left well alone and welcomed the cute little ducks to the pond. It was a perfect 72 degrees in Phoenix, with warm sunshine and a crisp breeze to fuel Maddison's excitement. The little sparrow Maddison saved last week is doing great! Once he grows back his flight feathers he will be the next to be released back into "birdy paradise" as Maddison would say.

School last week wasn't so great, of course I spoke too soon! Maddison had strep throat by Friday and now we both have a yucky cold. Maddison feels "brilliant" though, and she is zooming around the house being crazy with her sister. I think my thirst from running a bit higher is about to drive me insane. What torture! No amount of water can drown this thirst, I'm running in the 180's...imagine the thirst if I was in the 300's!!! Sheesh! Its like an itch you just cant get rid of! Maddison's numbers were great all weekend, send her to school today and BOOM! 298 was back after breakfast! ERRRR! I have to figure something out, last year she had a pattern for school and home, so I guess that is what we are looking at since no other adjusting seems to work.

We are crazy busy getting ready for the JDRF walk in just 2 weeks! We have a car wash this weekend with our awesome support group families. I was contacted by our friends at the local JDRF chapter to talk about Diabetes and Halloween. Our city of Peoria newspaper is going to do an article on Maddison and how our Halloween has been effected by Diabetes. It is kinda funny because we all know it hasn't really been much of a change, except now we count the carbs and jab ourselves full of insulin praying it turns out right! As a parent of course, I will probably be up chasing numbers all night. And, for Maddison we do avoid the "sweets" and go more for the chocolate, hoping to avoid a HUGE spike. Yeah, that is funny. We don't get a spike with chocolate, but mom gets to chase the delayed high all night! So today I had to issue a picture of Maddison and paragraph of our experiences to get this article going in time for Halloween. It should be interesting to see how they could possibly butcher my paragraph and entangle my words. That always seems to happen with articles. Oh well. It will be fun to add that to our list of helping to raise awareness anyway!
Posted by Kelly at 8:05 PM