Wall to wall trampolines, even half way up the walls. Bounce houses. Obstacle courses. LOUD music. Did I say LOUD music? An awesome new place for kids, quite different from the typical "bounce house" party land for younger kids. This place is focused on older kids and teens. No princess jumpies here. For some reason 20,000sq feet of endless trampoline just doesn't seem like a good idea in my mind, Diabetes or not. href="http://3.bp.blogspot.com/_VBMWfxG6Rsg/TJWjRYnmgJI/AAAAAAAACok/1OOoYtLiI68/s1600/JUMP.jpg"> 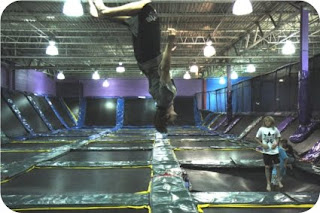 In August my co-workers teenage son broke his ankle bone LITERALLY in half at this place when he landed wrong and someone else fell on him. Surgery was needed. A few weeks later another co-workers daughter sprained her ankle so badly that the ER doctor said it would have been easier if she broke it. At least then they could fix it. Apparently, this place is keeping the ER's busy around here. I have heard it time and time again from neighbors, friends, teachers, even some random chick at the grocery store. This place is bad news. Head injuries. Broken arms. Broken legs. I even heard my Hannah say someone at her school broke their neck. Seriously. The problem with this place is that there are so many children jumping at once and you cannot predict other's behavior. They allow 50 jumpers to jump for one hour. FIFTY.

First, let me say, I thought we were safe from this place. Its about 20 minutes from our house. SURELY no one in our part of town would plan a birthday party there right? Ive heard the stories all summer from Hannah and her friends. Ive heard how cool this place is for teens. After all, you can flip around like a gymnast and listen to outrageously loud music with minimal supervision on these trampolines. Bounce off the walls. Literally. Back flips and sky high somersaults on trampolines? With 50 other teens and kids running all around you? Sending Hannah without Diabetes was concerning enough. Sending Maddison? My child with Diabetes? Well, SHIT. That's a whole bunch of concerns all jumbled into one HEART ATTACK for this Momma Pancreas! Thank goodness we dont live nearby!

Damn that birthday invitation. We were doing so well with birthday parties. Maddison has FINALLY gotten to the point that we dont have to follow her around for parties anymore. You know. We are just like you....we are the parents lingering around the birthday party, hiding in the background trying not to be seen while we anxiously calculate cake, candy, ice cream, snocones, chips, pizza, and other birthday carbohydrate craziness for our child with Diabetes. I should say, that was us. Up until the last year or so. We did our time as the parents of a little one with Diabetes. I cant begin to count the birthday parties that broke my heart, because I was the only parent that had to stay. :(

Maddison has taken on the world of parties herself for awhile now. Thank goodness for cell phones. Now THIS birthday invitation. Damn it. I thought swim parties were bad. THIS? This is the worst. Sorry Maddie, this momma has no choice but to join you for this one.

Jumping and swimming have always been on my SHIT list when it comes to Diabetes. You never know what to expect. This kind of birthday party calls for some serious planning and mind power. My purse was packed. Juice. Skittles. Gatorade. Granola protein bars. GLUCAGON. I had a plan. Reduce basal two hours prior. Subtract 10c from lunch. Time to jump. Maddie's 160 with .1 active. PERFECT. But not for jumping. 15c should do it. YES. Stick to just 15c for now and check in 20 minutes.

I screwed it up, YET AGAIN!! Damn the fear of lows! Fear of lows always makes me over do it! There is nothing like the feeling you get watching your kid try to fight a low blood sugar because they just want to keep jumping or swimming like the rest of the kids. There is also nothing like seeing the life being sucked out of your kids just because a little trampoline fun. Man, that pisses me off. And, scares the heck out of me! So, I always seem to over do the carb load. Better to fix the high later than to chase the low I guess.

I panicked in the last minutes before I sent Maddison off to jump. FEAR OF LOWS took over as I watched the other kids and teens jumping all around, 6ft in the air. Dripping with sweat. I wasn't so concerned with broken bones at this point. I just wanted to keep my kid alive and seizure free! In that last moment of panic I ended up giving Maddison another 15c of Gatorade before I let her jump. Thats 30c unbolused people!! What was I thinking!!?? If she had more insulin active then yes, that would have been the right decision to make. Just .1 active! Freak out Momma mode made me over do it, even when I KNEW .1 active was OK!!! .1 wasnt gonna be enough to push those 30c anywhere!!?? UGH. Stupid me. Stupid fear of lows.

15 minutes later Maddison is back panting and sweaty, holding out her finger for me to poke as countless people watched. I hate that. I knew I screwed up. A quick check showed a 228. Realizing Im a moron, I bolused a tiny .2 knowing exactly what was going to happen next. Mr Liver will decide Maddie needs some glucose with all this exercise ya know! 15 minutes later, 338. The .2 will be plenty. Amazing, but true. Thats how it works for Maddison. Give her a 400 with a .2 and an hour of jumping and she will end up just FINE.

Years past Ive learned the hard way that active insulin and Trampolines are seriously freaking DANGEROUS. Ive pumped Maddison up to a 400 PURPOSELY because she has gone swimming or jumping with active insulin from her last meal. The last bounce house party we went to Maddison dropped from a 400+ to 60 in just 30 minutes because it was just an hour after lunch. Never mind the 20c I gave her unbolused. Didnt matter. Active insulin + exercise for Maddison = WATCH THE HECK OUT! Man, was I happy the day our own trampoline popped its last spring!

Temp basal reduction of 30% is set for the next 8 hours. Maddison's been hanging around 80-120 at night. Another 20c with some PB and she's sitting pretty at 160. Just where I want her to be tonight. Next check, 2am.

Well, 2am kicked me in the ass. 410. -Sigh- Correct in full? I said NO WAY after all that jumping, husband said yes. So he did. Next check, 230. I guess Diabetes told me, seems Diabetes always has to remind me of who is really in charge. Damn it! (I say that with a sense of "humor") :)

I really hope they don't build one of those near us!

It sounds like you did an amazing, amazing job. The best part about this whole story is that she was able to do everything. She didn't miss a single thing!

You did a great job telling this story - very entertaining. Also inspirational. It helps to know that others don't let diabetes get in the way of letting their kids do things. it gives me encouragement that I can do it too.

I always say the only predictable thing about D is its unpredictability! Crazy D!

I'm praying my children are never invited to party at that place! :)

Yuck to jumpy places! We have not had to experience bounce houses yet, so I am NOT looking forward to it.

Swimming about killed us this summer (bad choice of words? LOL)

Glad she made it through with no scary lows. Sometimes I would rather fight the high on the other end to avoid those lows in the beginning.

WOW...what a rollercoaster ride on the trampoline Kelly. Parties are still pretty hard for us and I am still there lurking in the periphery. I am hoping to not have to go soon...but, if we had a place like that in Vermont you can bet your patootie I would be there checking and carb loading.

Remember PPP the other weekend?

Yeah....we were there -- NOT at the bday party the other 2 were at with Jay at THIS VERY FREAKING PLACE!

Hi five, my friend. You rocked it.

I don't care what 2 am says. You OWNED the D Monster!