The past two weeks have flown by, and I am still not sure what is happening day to day. We are still having computer issues, Internet....whatever it is. I have been too busy to take the time to disconnect everything and take them in for help. I hate getting online and being thrown out in the middle of my work!

Maddison is still up, down and all around. She is doing very well and is "stable" overnight, and good on weekends. Send the girl to school and you don't know what to expect. It really is driving me crazy. I can tell you her teacher is the start of a huge problem. Maddison has cried several times after school because her teacher has embarrassed her in front of the class by repeatedly "nagging" at her to "focus" and "hurry up" to catch up and complete her work. Maddison has been going to the nurse feeling low, but is actually high. For a whole week she visited the nurse about 5 times a day. So, her teacher would ask Maddison when she returned what her blood sugar was in front of everyone. Then she began taking away Maddison's "green card" if she was not finishing her class work due to being in the nurse's office too frequently. This teachers overall personality is pretty bland. She isn't able to relate or show emotion to the kids, and she is very sarcastic. I can tell she thinks that Diabetes is a simple "food" disease by comments she has made. I am entirely frustrated hearing about Maddison's day when she comes home from school. I think she is so stressed out in that classroom that her blood sugars are entirely effected. I have met with the nurse and school Psychologist about all my concerns so the teacher has been spoken to for now. I just think we will have problems all year with this teacher. We have a meeting scheduled to go over all Maddison's Special testing that has been completed and we will pretty much all have a good sit down to review everything with everyone at the school.

Wednesday the school nurse called me on my way to work at 8:30 am, yes, school starts at 8am. She said Maddison had a stomach ache (which is normal for her) and a slight fever of 100.2....so I go to pick her up from school. No work for me. Funny she looks fine, and doesn't feel hot AT ALL, clammy if anything! So I brought her home. Three different thermometers read 98.6 or under. Interesting. I honestly feel that she didn't want to deal with Maddison that day. I called the nurse and asked if she gave her Tylenol. Nope. I told her that she doesn't have a fever at all according to my readings. I voiced my concern that she was again missing school (the 4th day this year!) She suggested I have a rapid strep test done (because Hannah had strep the week before) and said I can bring her back to school if her fever is gone. WHAT!? Hmmmmmm......sounds weird to me. But, with so much going on, I let it go, added it to my list of concerns and went on with my day very much disgusted with how this year is going for Maddison.

So then I get the call that Josh's Grandfather was suddenly struck with a fever and very ill. He has been in a beautiful group home since July. He has a progressive brain disease that over the last 4 years has left him unable to care for himself. His beautiful wife of 59 years has been caring for his every daily need since then. When it became too much and he began to lose the ability to walk and stand they moved here to Phoenix from Montana and found a home here with their daughter who is an RN. Best part? They moved right across the street from us in our cul-de-sac. Between Josh, me, Grandma and their daughter, we were able to help care for him and avoid putting him in a care home. Hannah is his best buddy. Although he lost the ability to speak, he always mumbled something for Hannah. We helped put him to bed each night, bathed him, made dinners, kept him company. We are very lucky to have been able to help care for him comfortably in his own home for so long being the progressive state. Just 3 days prior we all celebrated their 59th wedding anniversary. Hannah fed him his cake. He looked good, we laughed, and had no idea how quickly things would turn.

As the day went on, I had many phone updates on Grandpa. I was told that Hannah and Maddison may be scared to come and see him in this state of health. No one thought it was a good idea for me to bring them to see Grandpa. Although his eyes were partially opened, he no longer responded to anything and couldn't move. With a high fever and excessive fluid in his lungs Hospice provided comfort care. The family came to his bedside. Hannah and Maddison decided they wanted to see him. I went into Grandpa's room first to make sure this was a vision that wouldn't haunt the girls when they remember Grandpa. I thought there was no way he would make it through the night, but he did. It is amazing how the body fights. I kept the girls home from school on Thursday because we cried so much the earlier night. We did alot of talking about life, about Grandpa, and how we knew Grandpa would be going to heaven. Maddison said she knows Grandpa's heaven has lots of chocolate chip cookies. We always made cookies for Grandpa. Thursday morning the Pastor came and spoke Grandpa's last words, and renewed the wedding vows. And then, tears came from Grandpa's eyes. No response otherwise. He was there, and he knew. Amazingly, family made it to Grandpa's bedside from Montana. Within minutes, he stopped breathing.
9-11-2008 has a yet another meaning in this family. Grandpa went to heaven with the comfort of his family surrounding him. He was 81. 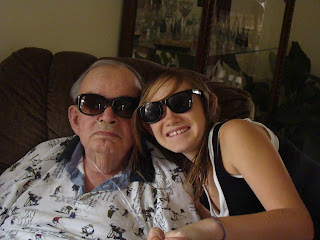 Well, it is taking me days to finish this blog post. Our lives have been spinning in a whirlwind of commotion the last few weeks. I have so much to say, and no emotion left at the end of the day to express any of it. I feel completely overwhelmed and frustrated with so many things. Words aren't coming easy. So instead of finishing all I wanted to say I will post our finally completed video for the 2008 JDRF walk.........No background music, which is a whole 'nother story. At this point I just gave up completing it how I wanted. I don't have the time or energy (or patience!) to mess with it any longer. Hopefully soon I will have my sanity back.
Posted by Kelly at 9:31 PM

Our thoughts and prayers are with you and your family.

I also hope things get better with the people you're struggling with at school.